Encyclopedia Brown: These classic mysteries have stood the test of time! Encyclopedia is a boy detective who helps his father the police chief solve crimes. Each short mystery is presented in a chapter and then readers turn to the back of the book to find out how the mystery was solved. Fun for those who like to have a chance to solve the mystery themselves! 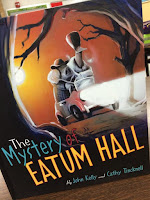 The Mystery of Eatum Hall by John Kelly

This picture book mystery gives readers plenty of clues in the illustrations. A clueless pig and goose are invited to a mysterious stranger's mansion for a weekend of delicious meals. The only problem is: their host is missing and he may be a WOLF!  Clues in the words and illustrations will lead readers to come up with their own conclusions about the mystery of Eatum Hall.

The Case of the Stolen Sixpence by Holly Webb

Twelve-year-old Maisie is a noticing sort of person. Thats why she is convinced she would make an excellent detective if she ever got the chance! But instead of detecting, she spends her days polishing the banisters at her grandmother's boarding house or fetching fish for the lodgers' dinner. In The Case of the Stolen Sixpence, Maisie's big chance to prove herself finally arrives when crime strikes her Victorian London neighborhood. While the grown-ups turn a blind eye to the whodunit and justice goes un-served, Maisie and her canine sidekick, Eddie, search the streets for clues to crack the case.

The Ruby in the Smoke by Phillip Pullman

“BEWARE THE SEVEN blessings . . . ” When she first utters these words, 16-year-old Sally Lockhart doesn’t know their meaning. But when an employee of her late father hears them, he dies of fear. Thus begins Sally’s terrifying journey into the seamy underworld of Victorian London, in search of clues to her father’s mysterious death. This book is the first in a young adult mystery series.

Need some cheering up? Brighten your day with live cams from all around the United States! https://explore.org/livecams Pandas, manatees and kittens are among the animals you can view.

Tween and teen book bundles are back now through Saturday! 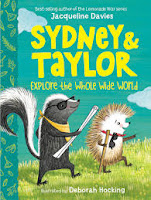 This is a new chapter book from Jacqueline Davies! Sydney and Taylor Explore the Whole Wild World

The readers' guide includes fun activities to accompany the book. This is the beginning of a new series.

Sydney is a skunk and Taylor is a hedgehog, but no matter how odd the pairing may seem, their friendship comes naturally. They live happily in their cozy burrow . . . until the day Taylor gets his Big Idea to go see the Whole Wide World.

As the only Indian American kid in her small town, Lekha Divekar feels like she has two versions of herself: Home Lekha, who loves watching Bollywood movies and eating Indian food, and School Lekha, who pins her hair over her bindi birthmark and avoids confrontation at all costs, especially when someone teases her for being Indian.

When a girl Lekha’s age moves in across the street, Lekha is excited to hear that her name is Avantika and she’s Desi, too! Finally, there will be someone else around who gets it. But as soon as Avantika speaks, Lekha realizes she has an accent. She’s new to this country, and not at all like Lekha. 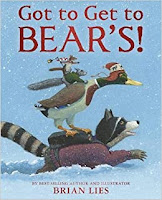 Got to Get to Bear's by Brian Lies

Bear has sent her friend Izzy, the chipmunk, an urgent request: come quickly! So despite a bad snowstorm, Izzy starts off for Bear's. Along the way she gets some help from her other animal friends and they arrive at Bear's just in time for a surprise! A cozy winter tale with a surprise ending and a message of friendship.

Elizabeth, eleven, spends Christmas break at Winterhouse hotel under strange circumstances, where she discovers that she has magic, and her love of puzzles helps her solve a mystery.

Over and Under the Snow by Kate Messner

It's hard to imagine what happens to animals in the winter. How do they stay warm despite the snow and cold temperatures? This nonfiction book explains it all! Beautiful pictures of what's happening above ground and under the ground will help you imagine what you can't always see in winter!

Lunar New Year begins on Friday, February 12. Here's link to a new collection of the books for all ages at Lawrence Library that are all about Lunar New Year. You can login and put them on hold or request them from the library by emailing Ms. Moriarty: kathleen_moriarty@psbma.org