We had a special author/ illustrator visit today with Anna Alter! The kindergarten and first grade students got to meet an author to learn how books are made and how much work goes in to creating the words and the art for a picture book.

Ms. Alter has written many picture books and now a series of short chapter books (Sprout Street Neighbors) and this is the second time she's visited Lawrence School. We read one of her picture books, Disappearing Desmond, in the library and students have also been borrowing her other books to bring home.

She told us all the parts of making a book and even showed us her brainstorming notebook and her early sketches. She was kind enough to demonstrate how she draws some of her characters--you can see two of the drawings on display outside the library!

Ms. Alter encouraged all students to start drawing and writing their story ideas--she's been a writer since she was their age!


Thanks to the PTO for funding this fun event! 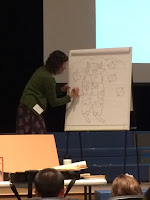 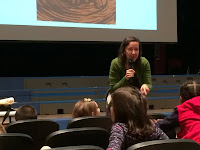 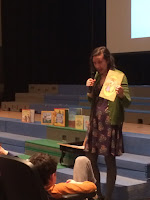 All the votes have been counted and the 5th and 6th graders chose The War That Saved My Life by Kimberly Brubaker Bradley as our MA Children's Book Award Winner for Lawrence School. The winner for the state will be announced on Monday, April 9.

The book is a work of historical fiction about a young girl, Ada, who is living in London during World War II. She is living with a club foot that has never been corrected and is tormented by her mother who doesn't think Ada will amount to anything. Ada gets her chance to go with her brother, Jamie, to the safety of the English countryside, escaping her tyrannical mother and experiencing living outside the city for the first time. She and Jamie are placed with a reluctant guardian, Susan, who warms up to the children as they learn to trust her.

Our students have good taste in books: this book also was selected as a Newbery Honor book in 2016! The sequel, The War I Finally Won, was recently released for those who want to know what happened next! Both books are available in our school library.